Stephen Levy recently wrote about a team of YC alumni, Google and others to help fix HealthCare.gov. They've made a huge impact.

Dan Portillo, from Greylock, is now helping put together a tech team to help the Veteran Administration (VA). My brother is a veteran and he ran into a lot of issues at the VA. It was so frustrating, he ended up buying private insurance instead. If anyone is buying private health insurance instead of using the VA, which would be free for veterans, something is fundamentally wrong with the system. 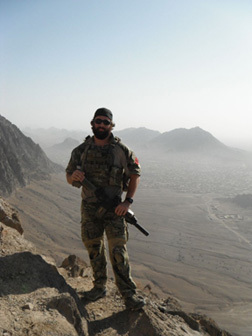 Picture of my brother in Afghanistan a few years ago.
Here’s the details that Dan recently sent out.

Over the last couple of weeks I've been talking to Todd Park and Jennifer Pahlka, White House CTO, and Deputy CTO respectively, about putting together a team to help address the technical issues around the Veteran's Administration, I'm sure you've read the news about how people have been dying waiting for treatment. Program would look a lot like the healthcare.gov rescue. I was trying to see if I could take 3-4 months off from Greylock to work on it, but it's just not possible right now. There are a couple things I would ask the group to try and help.
1. They need a talent leader who can help bring 20 or so folks, mix of professional services, design, engineering, data scientists and SREs. They'd also be working with companies like Facebook & Google who are looking at donating developer time to. Person should be pretty senior and be able to identify the right ICs and leaders.
2. Helping the come up with the 20 people who will actually be doing the work. Positions are paid, but they're in the 100-150 range, so the right person will probably already have made some money and want to work on something meaningful.
Happy to talk to anyone who's interested in learning more. Dan

Let me know if I can put you in touch. This is a problem worth solving.