I remember hearing about a company with an extremely charismatic CEO. The company wasn't doing well, but he was a compelling individual. He'd give a talk and the team couldn't help but believe in the vision. Investors believed too. Everyone got a jolt of energy.

But, as soon as everyone got back in the trenches, people realized that none of the things the CEO said mattered. The company wasn't doing well. The tactics weren't working. And, the energy from his talk would fade quickly, like a crashing sugar high, because the content wasn't based in reality.  Everyone became demoralized.
I'm sure we've all heard, or experienced, that kind of story.
The Spartans had a word for this kind of mental state, where a speaker or a moment can inspire a departure from reality. It creates “katelpsis,"  possession [1]. It may sound like a motivating force and for a moment, even a crashing company can feel great.
The Spartans saw katelsis as a "derangement of senses," which is a dangerous mental state. It's was something to be avoided, since possessed, knee jerk decisions without reflections could be dangerous, especially in a battlefield. Calm minds and solid fundamentals would prevail, not a thoughtless frenzy.  (Your company should never be frantic) 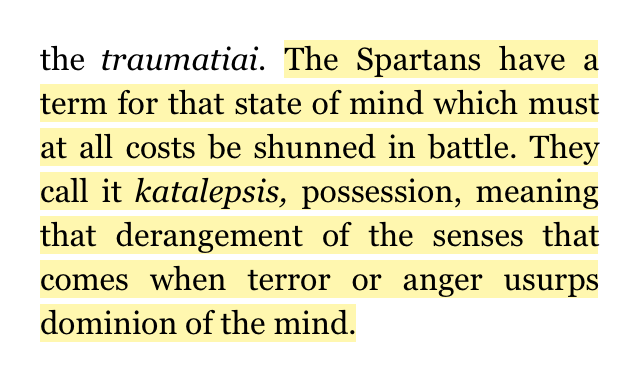 It’s not the charisma that’s unhelpful, it’s the motivation without enduring substance. It asks an audience for trust, since the substance isn’t there to back it up. That approach only works a few times, until that trust is lost and people become demoralized.
I imagine two companies with the same progress. Maybe both have been struggling, building a product without traction. Yet, one team is driven by possession, the other is driven by a honesty, energy and a plan. The first one will energize momentarily and crash - the second team will problem solve and make progress. When I hear people pitch, I always think about what category they fall under.
[1] Great book, called Gates of Fire, about the battle of Thermopylae. It’s hard to evaluate the historical accuracy of these things, but I think the sentiment is something we can learn from.